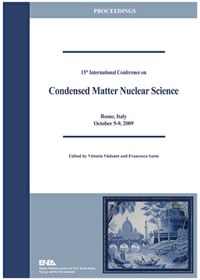 In 1989 two electro-chemists, Martin Fleischmann and Stanley Pons announced that they had produced nuclear fusion reactions between deuterium nuclei in a table-top experiment, under ordinary conditions of temperature and pressure, by using electrochemistry. The experimental evidence consisted of the production of large amounts of heat, which could not be attributed to chemical reactions. The heat excess was revealed by means of calorimetric measurements during electrochemical loading of palladium cathodes with deuterium.

The reactions were termed “cold fusion”, by comparison with the high temperature of thermonuclear fusion.

One of the most intriguing features of the experiment was the substantial lack of the typical nuclear emissions associated with the excess of power, produced in thermonuclear fusion experiments.

The experimental results thus were in contrast with hot fusion data and were not supported by accepted theories. Many scientists concluded that there were no nuclear reactions and that the reported experiments were in error. This produced a partition between the traditional scientific world and the community which continued its research in the field.

In the 20 years elapsed since then, increasing evidence was found of the reality of the phenomenon, reproducibility was improved, and recently cross-check experiments have been implemented.

The target of the Symposium was to stimulate critical revision of the research work discussing in deep the possible sources of artifacts and errors in the experimental results,  highlighting the working hypothesis, approximations and limits of the theoretical models.